“… in the most extreme examples, foreign migrant workers have become suicidal after being trapped without pay by employers in Qatar. They have been forced to depend on charity from others simply to eat. Meanwhile, their family members in poor communities in their countries of origin can face eviction and other serious challenges…” 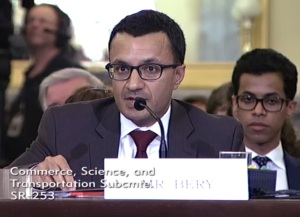 “Chairman Moran, Ranking Member Blumenthal, distinguished members of the Subcommittee, and distinguished guests: On behalf of Amnesty International, thank you for the opportunity to address the issue of human rights in Qatar and the 2022 FIFA World Cup.

The 2022 FIFA World Cup has brought into global focus the shocking conditions that are routine for migrant workers in Qatar.

Under Qatar’s Kafala employment sponsorship system, foreign migrant workers cannot change employers or leave Qatar without the permission of their current employer. Even if an employer is not paying the employee, the employer can still block the employee from changing jobs or leaving the country.

In 2012, the Qatar National Research Fund funded a survey of some 1,000 low-income labor migrants:

● 90% of migrants said their employers possessed their passports, a violation of Qatari law.
● 20% said their salary was different than the salary they had been promised prior to leaving their home country.
● 21% said they “sometimes, rarely, or never” received their salary on time.

As documented by Amnesty International researchers James Lynch and Mustafa Qadri, in the most extreme examples, foreign migrant workers have become suicidal after being trapped without pay by employers in Qatar. They have been forced to depend on charity from others simply to eat. Meanwhile, their family members in poor communities in their countries of origin can face eviction and other serious challenges because a family member is trapped in Qatar and not being paid for work they have done.

There are over 1.5 million foreign nationals working in Qatar today. Well over 90 percent of the total workforce in Qatar consists of foreign nationals. These numbers have increased at a dramatic rate, with Qatar’s population growing by a staggering 43% since the country was awarded the World Cup in December 2010.

This is occurring in the context of a massive construction boom in the country. The Government of Qatar is spending hundreds of billions of dollars in a massive infrastructure development program. This new construction goes well beyond stadiums. Many of these construction projects aren’t solely for the World Cup, but they remain central to the success of this event and the overlapping effort to make Qatar a global destination for tourism and commerce.

The problems faced by foreign migrant workers in Qatar go beyond the restrictions placed by the Kafala system. Foreign migrant workers are forbidden from forming or joining trade unions. While Qatar does have labor laws which should offer some protection for workers, these are not enforced effectively.

To make matters even worse, thousands of foreign migrant workers in domestic service roles are specifically excluded from the protections set out under Qatar’s poorly enforced Labor Law. These migrant workers, who are mainly women working in households, are exposed to even greater labor exploitation and abuse, including sexual violence.

Qatar’s Claims of Reform: The Reality

Despite repeated announcements to the contrary, the Government of Qatar has failed to address the problem of labor exploitation. In May of 2014, the Qatar government promised some limited reforms to address the widespread exploitation of migrant workers in the country. But one year later, none of these reforms have been implemented.

In 2014, Amnesty International identified nine key labor exploitation issues that Qatar should address urgently. One year later, nothing has changed in four of the most critical areas of abuse. Only limited actions have been taken in the remaining five areas — actions which do not address the fundamental structural factors that facilitate abuse in Qatar.

FIFA and the World Cup

The ultimate responsibility for the rights of workers in Qatar rests with the Qatari authorities. But when FIFA awarded the 2022 World Cup to Qatar, it assumed a responsibility for the human rights impact of that decision. Unfortunately, FIFA’s efforts have fallen far short of the concrete action needed to ensure that the World Cup in Qatar is not based on labor exploitation.

In my written testimony, I have outlined specific solutions to Qatar’s problem of labor exploitation. These solutions should be implemented by the Government of Qatar, FIFA, companies in the construction sector, and countries that migrant workers are from. The United States government can help in specific ways.

For the Government of Qatar, the solution, of course, is to fix its deeply flawed Kafala sponsorship system and address the many other problems that I have highlighted today.

For FIFA, it is not enough for the organization’s officials to simply accept the verbal commitments of the Government of Qatar. FIFA must send a strong public message to the Qatari authorities and the construction sector that human rights must be respected in all World Cup-related construction projects, and FIFA must put in place effective systems to monitor and report on this. This includes not only stadiums and training facilities, but also hotels, transport projects, and other infrastructure.

If reforms are not put in place urgently, the facilities for the 2022 World Cup will carry the permanent stain of forced labor and human suffering.

On behalf of Amnesty International, thank you for the opportunity to testify today.”